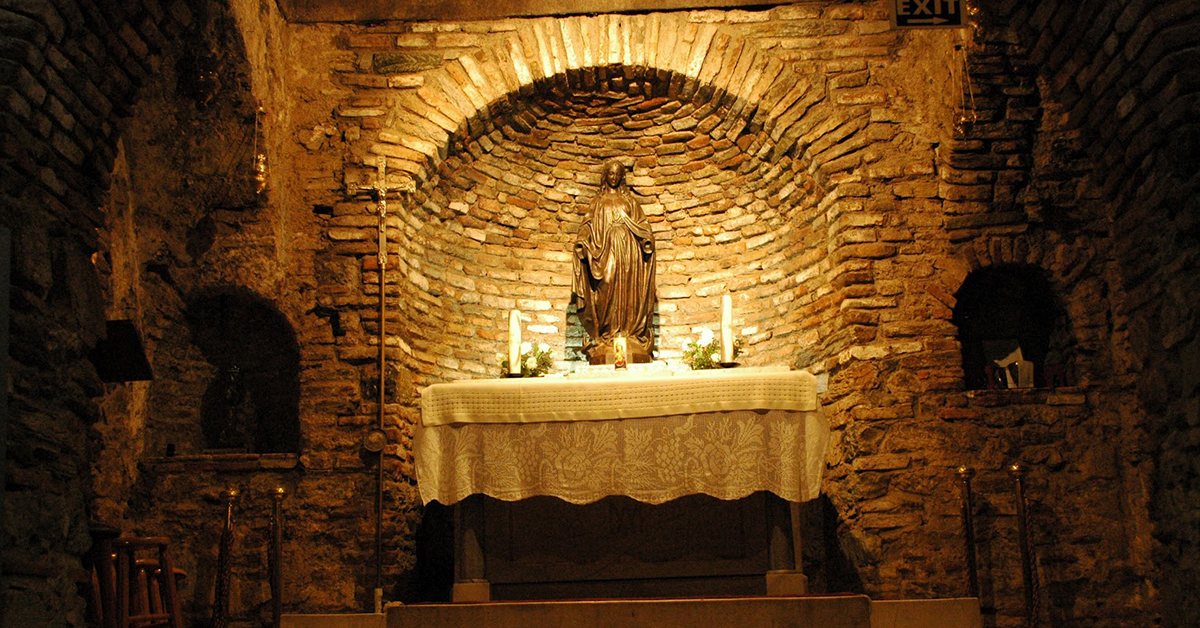 As these envisions continued, as the patient told about persons, places and events which he could never know with great details, attracted attention of public and some intellectuals and evokes admiration among people. One of these people, Clemens Brentano who was poet from the German romantic stream came and settled in Dülmen as a secretary of Emmerick in 1818.

Along the time, he kept record of what Emmerick said including the ones about Jesus Messiah and Mother Mary. While he was reviewing the collected material, Brentano decided to publish them and he wrote a book under title of “Dolorous Passion of Our Lords Jesus Christ” in 1895. Upon the author’s death (1842), “The Life of the Blessed Virgin Mary Based on Visions of Anna Katharina Emmerick” was published.

It is written in the one section before the final section of this book that Blessed Mary, after Jesus Christ rose above, stayed three years in Sion (Jerusalem), three years in Beytanya and nine years in Ephesus. St.Jean brought her here after Jews left Lazarus and his sister in the sea alone. Mother Mary did not live exactly in the Ephesus; she stayed in proximity of the town where some of her friends were living. Her house was on the heights of a mountain, on the left side of the road coming from Jerusalem, 3.5 miles away from Ephesus. Narrow pathways from south of the Ephesus was taking you to the top of the mountain covered with wild vegetation. There was rippled flatland with half-a-mile width toward the zenith of the mountain, covered with vegetation as well. Residence of Mother Mary was established right at

that spot. Mentioned area was rather desolate and ornamented with nice fruitful hills; there were cave among narrow earth gaps; regular but virgin hills were in pyramid shape housing shadowy sparse trees with straight body.

When St.Jean took Mother Mary to there, he built a house for her. There were some Christian families and religious women living in the area. Whereas half of them were living in caves transformed into houses by means of wooden structures; the other half was living in tents.

These people retreated up above the mountain before great oppression and massacre. By residing in caves with couple of hundred-meter distance among them, by selecting natural cavitation as shelter, they used these rather silent places as shelter. Only Mother Mary’s house was made up of stone. The pathway in the backside of her hose was climbing up to the mountain. It was possible to view Ephesus and Aegean Sea embellished with isles from the rocky zenith. This lonely place was closer than Ephesus couple of miles away.

STORY OF RE-DISCOVERY OF HOME OF MOTHER MARY (1891)

Re-discovery of house of Mother Mary was subject to a story mentioned in records of a monastery. While aforesaid section of the book called “The Life of the Blessed Virgin Mary Based on Visions of Anna Katharina Emmerick” was being read at the İzmir French Hospital in a group, details about the Mother Mary’s house in Ephesus captured attention of Caritas Girls’ School Principal Mother Maria de Mandat Grancey who previously worked in Ephesus. The she requested from Father Poulin and Lazaı isl l’edeı Jung, teacher at the İzmir Sacred Cocur College and came to hospital to officiate a service that whether these “Revelations” were accurate or not.

way: “Towards the middle of November 1890, some clerics in İzmir encountered a book called “The Life of the Blessed Virgin Mary Based on Visions of Anna Katharina Emmerick”. At first, aforesaid clerics were not on the side of these revelations. However, when they read the book, they admired extraordinary simplicity of this brief, pure, affection story; and surprised substantially. They were determined to find out reality of this fantasy. In the last two sections of the book, Emmerick told that Mother Mary lived in a house built by St.Jean in Ephesus neighborhood; and she was describing the house, the landscape, location and distances in finest details.

Therefore, everyone decided to see reality of these descriptions in person; then, they travelled the area mentioned in the book. This was the only thing needs to be done to test reality of these explanations. Father Jung, the most vigorous opponent, was invited to lead the group. He also invited another cleric who just returned 1870 wars and who was skeptical about Emmerick’s revelations like himself. He also found a railway servant to assist them in handling luggage during the trip. In order to resolve this issue for good, which arose based on the explanations of Emmerick and dreams of a poor day dreamer, they set off the way as they were determined to examine the mountain. Nevertheless…

On Wednesday July 29th, 1891, the Ave. Martha Day devoted to St.Jonah, this small group progressed toward the direction mentioned in the book as there was a compass in one hand; then encountered with the mountain. Explorers reached an open area about at 11 o’clock in the morning. They met couple of women who work at their tobacco field assiduously. If they were under different circumstances, it would grab their attention seeing people working in a land at this altitude. But, members of the group shout “water, water please” to those women since they were exhausted and thirsty due to tiredness and sun light. But women in the land replied

“we do not have any water left. But, if you go down to the monastery, you may find” by indicating a small forest ten-minute-walking away. Then, the group turned and set forth that direction immediately.

As the group moved on their way, they found remaining of a hidden house, indeed a church, under trees next to a water spring in a great astonishment. They immediately recalled Emmerick’s book. Open area, ruins, rocks at the zenith, mountain behind and sea view in the front…

They thought that “was this really the house we are looking for?” They were so excited and they needed to be sure. Emmerick was saying that “It is possible to view both part of Ephesus and the sea nearby from the top of the mountain where the house is located”. As the group forgot about their tiredness, the heat and thirsty, climbed the hillside right away. There Ayasuluk (Selçuk) on the right, Panayır Mountain and the plain surrounding Ephesus like a horseshoe, sea on the left and Samos Island in near sight. Now that there was no any doubt.

The group was thrilled so much about their exploration. However, no one disengaged from the reality in case random conformity among all these. Caution necessitates them to investigate all details deeply before expressing their judgment and especially expose their opinions to others.

For two days, by acknowledging themselves that they found something which no one believes in, they searched the house, natural structure in neighborhood and location of the house to make sure about their exploration. Finally the committee returned to Izmir to report finding of this expedition to everyone.

After fifteen days, a second group set off their way to the explored are to audit the finding on August 13th. They did not only confirmed the findings of the first study,

additionally, some other details ignored by the first expedition group in July were determined as a supportive evidences for Emmerick’s revelations.

Afterwards, a third expedition group lead by Father Jung and other four or five members was organized in the period of August 19th-23rd. They stayed in there for a week. They investigated, measured, photographed and sketched anything that could be interesting completely and accurately.

When they returned to İzmir, they brought maps, drawings and photographs. The most importantly, they were sure that they found what was revealed by Emmerick without any doubt. Now that, religious authorities intervened in the findings to confirm what was found.

On December 1st, 1892, İzmir (and Ephesus) Episcopal Mons. Andrea Timoni, willing to confirm what was explained to him in person, climbed up to the Bülbül Mountain in a group of clerics. Thus, he had a chance to compare the house he saw and the one described by Emmerick to expose similarities. In an astonished and admired mood, he prepared an official letter immediately. In this letter, he wrote that “Now it is time to explain the incident to the Christian world. You will assess in person whether this house was the one occupied by Mother Mary during her stay in Ephesus really, or not.”